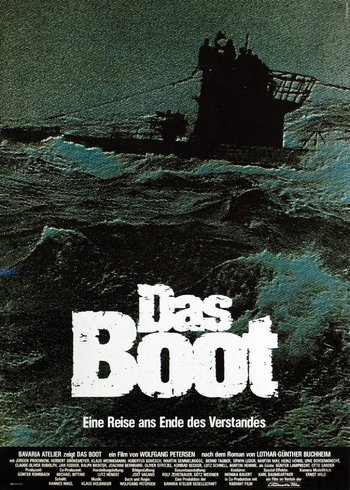 Das Boot ("The Boat" in German) is a 1981 West German war film (based on the 1973 novel of the same name by Lothar-Günther Buchheim) about the perils-ridden patrol of a World War II German submarine, the U-96

, in the Atlantic Ocean. It is directed by Wolfgang Petersen and stars, among renowned German stage actors, Jürgen Prochnow as The Captain (commonly called Kaleun, short for Kapitänleutnant, or der Alte / the Old Man), with a soundtrack by Klaus Doldinger. The movie is generally praised for its realistic portrayal of the claustrophobic atmosphere in a World War II era sub. As noted by many visitors to Bavaria Studios, the interior set of the sub is actually even more claustrophobic than comes across on the screen.

Across the multiple versions of the film that exist, the plot quite simply encompasses one naval patrol aboard the U-96 along with its crew. They initially struggle to stay alert while nothing happens for endless stretches of time in the middle of the Atlantic, and later on struggle to survive extremely dangerous encounters with Allied navy ships. That's pretty much it: all the weeks-long stretches of boredom interspersed by hours-long stretches of terror that made up real German naval patrols.

Fun Fact: When the movie premiered in the United States, the audience cheered at the caption at the very beginning that says that 30,000 of 40,000 German submariners died. The makers of the movie were really afraid at that moment, because that was supposed to be a tragic fact. By the end of the movie, however, the audience was also sympathetic to the submariners and, as said in the director's commentary, gave a standing ovation to the film.

Bavaria Film, the studio that made the film, created a sequel in 2018, also titled Das Boot, in the form of a series.