Film / The Boat That Rocked 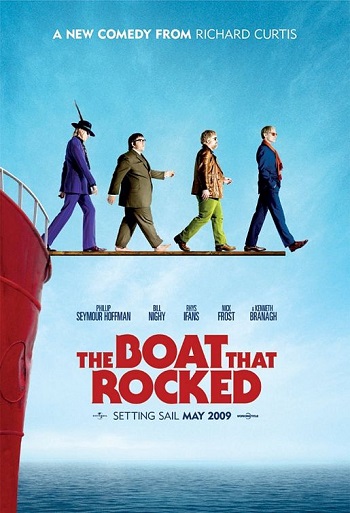 The Boat That Rocked (Pirate Radio in the USA) is a 2009 comedy movie by Richard Curtis (the writer of Four Weddings and a Funeral, Notting Hill, Blackadder and writer/director of Love Actually).

It concerns the adventures of Carl (Tom Sturridge), an English 18-year-old, in 1966. Carl's just been kicked out of school, and he is sent by his mother to live with his godfather Quentin (Bill Nighy), whose ship, the Radio Rock, functions as a pirate radio station. Hijinks ensue, as Carl befriends the various DJs onboard, such as The Count (Philip Seymour Hoffman) and his rival Gavin Kavanagh (Rhys Ifans). In doing so, he experiences Sex, Drugs and Rock & Roll, mentored by "Doctor" Dave (Nick Frost).

However, the eeeeeeeevil Minister Sir Alistair Dormandy (Kenneth Branagh) and his assistant, the appropriately named Twatt (Jack Davenport), want to shut down the Radio Rock as well as all the other pirate radio stations that bring such "depravation" upon the UK's youth in his eyes.