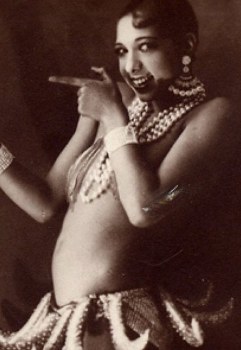 Part of her appeal was the fact that she appeared totally nude on stage, apart from an ornate banana skirt and jewellery as a cover. She sang and danced and also appeared in films playing the same part. This made her one of the most recognizable revue icons of the 1920s, 1930s and 1940s. Values Dissonance may frown upon her stage act nowadays, which emphasized all the stereotypes about African women being wild, animalistic, sex-crazed savages. Yet Josephine enjoyed playing the part, which she saw as self-parody. Interestingly enough the French accepted her as one of their own and the rest of the world also recognized her as a star. Pablo Picasso, Jean Cocteau and Ernest Hemingway all wrote in superlative terms about her. Thus she may have destroyed more racial barriers than one might expect seeing her in archive photos and footage today. And she always said in interviews that the French treated her more as an equal than people in her homeland America.

Josephine was more than just an entertainer, though. During World War II the Nazis weren't very keen on a black bisexual woman in their vision of a racially pure Europe, but they couldn't arrest or deport her. She was way too popular with the general public. Instead of being merely content with this luxury position during the Nazi occupation Josephine risked her own life by secretly working with the French resistance and carrying out important messages to the Allied forces while touring. No other celebrity during the occupation of Paris had the audacity to do this, though many claimed they did. After the war Josephine was decorated for her services to her country and became immortalized as one of France's greatest humanitarians.

Sadly, Josephine's personal life wasn't as succesful as her career. Despite being a celebrity star she would still encounter racism when she travelled abroad, especially in the USA. She refused to play to segregated audiences on her US tours, though. In 1951, when Josephine visited Sherman Billingsley's Stork Club in New York she was refused service because she was black. As fate would have it actress Grace Kelly was also present in the restaurant. Despite having never met Josephine before she felt so disgusted that she rushed over to her, took her by the arm, stormed out with her entire party and vowed never to return to this place. And they never did. Josephine and Grace become close friends after that night. Later when Baker was near bankruptcy Kelly (who by that time had become The Princess of Monaco) and her husband Rainier III of Monaco offered her financial assistance.

Despite Josephine's multiple affairs with men and women, her relationships all ended in divorce or separation. Not one to despair she adopted 12 orphan children from all over the world, nicknamed her Rainbow Tribe and let them live in her castle where she took care of them.

When Josephine passed away in 1975, her funeral shut down the streets of Paris. She got a full French military funeral ceremony and 21-gun salutes. She was inducted in the French Pantheon in Paris in August 2021, the sixth woman and first black woman to have this honor. The actual joining ceremony happened on November 30th, the anniversary date of her French naturalization.