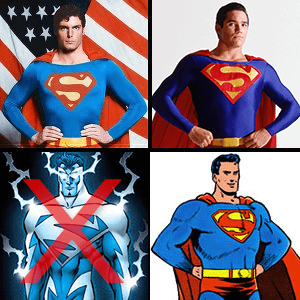 Even Running the Asylum, you can't really change Superman's costume.
Phil Coulson: We made some modifications to the uniform. I had a little design input.
Captain America: The uniform? Aren't the stars and stripes a little ... old-fashioned?
Coulson: Everything's that happening, the things that are about to come to light, people might just need a little old-fashioned.
— The Avengers
Advertisement:

A popular character is associated with just one outfit. Therefore the writers and/or executives choose to show the character in this outfit as much as possible, whether it be in the canonical works or merchandise.

It is important to note some things that don't fit this trope.

The line can be hard to tell, but one good way to know it's this trope is with Long-Runners that stick with the same basic outfit for a character. Even if there is a total change, they revert because it turns out the audience prefers that outfit.

Another way to fit this trope is if the costume gets some Costume Evolution but still retains the basic form, as with a Frilly Upgrade or some Pimped-Out Dresses.