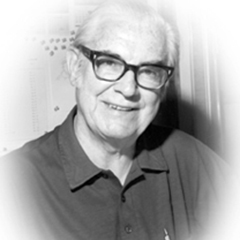 Once upon a time, Walt Disney and Ub Iwerks created a cartoon mouse that rose to stardom. As they experienced success after success, it wasn't long until the character became recognizable worldwide. After around 15 successful animated shorts starring the character, the King Features Syndicate offered to license Mickey Mouse and his friends as characters for a comic strip. Accepting the offer, Walt wrote the scripts for the comics that Iwerks illustrated. It worked out marvelously - up until Iwerks left the studio.

For some time after Iwerks' departure, Walt continued to write the scripts while Win Smith - the man who previously inked Iwerks' drawings - was given Iwerks' previous position. But Walt was more interested in animation than comics, and before long Smith was left with the responsibility of the entire daily comic strip series - the scripting, the pencil work, and the inking. Overwhelmed by the prospect of doing the whole thing by himself, Win Smith resigned, leaving the comic without a scriptwriter or an artist. And so, Walt was forced to search for another employee to take over Mickey's comic adventures.

A new employee at Walt's studio, he was enthusiastic about the prospect of cartooning. When Walt asked him to take over the comic strip, Gottfredson was disappointed; the high-responsibility position meant that he wouldn't be able to continue in the field of animation. After Walt assured him that the position was only temporary, Gottfredson reluctantly agreed to be the next writer, artist and inker for the Mickey Mouse comic strip. Gottfredson's "temporary assignment" is one he stuck with for the next 45 years of his life - from 1930 to 1975, he worked on the printed adventures of one of the world's most famous cartoon characters.

Gottfredson's first job with the comic strip was to finish the last story scripted by Walt, and along the way Gottfredson introduced more members of the story's cast beyond Mickey and Minnie. His work is what caused the comic as a whole to differentiate itself from Mickey's animated cartoons, giving it a more adventurous and plot-driven theme than pure comedy. He created a trend that continues in Mickey's comics to this very day.

Floyd Gottfredson is the creator of many recurring characters in the Mickey Mouse Comic Universe, including Mickey's nephews Morty and Ferdie, Detective Casey, Chief O'Hara, and Eega Beeva. Perhaps the most famous character he created, though, is none other than the Phantom Blot, who's considered by many to be one of Mickey's greatest arch-enemies alongside Peg-Leg Pete.

Gottfredson retired at age 70, and died 11 years later in 1986. Since then he's been inducted into the Comic Book Hall of Fame and has been honored with the Disney Legends citation for contributing so much to the Walt Disney Company.

He was a skillful artist and an inspired man. It's agreed that he's been one of - if not the - biggest influences for the Mickey Mouse Comic Universe. Just as Carl Barks is considered master of the Ducks comic universe, Floyd Gottfredson is the maestro of Mickey and the Mice universe. Barks also said that Floyd's comics were a big influence on his Donald Duck comics.