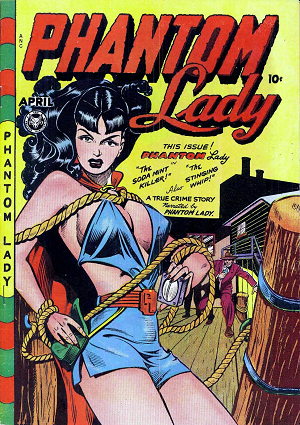 One of the most important covers of comic book history.
"Sexual stimulation by combining 'headlights' with the sadist's dream of tying up a woman."
—Fredric Wertham, Seduction of the Innocent
Advertisement:

Created by the Eisner & Iger Studio, the Phantom Lady - civilian name Sandra Knight - debuted in August 1941 in Police Comics #1 (alongside Plastic Man, Firebrand and The Human Bomb). To the world, she was the rich socialite daughter of Maryland senator Henry Knight; in her spare time she fought crime and war saboteurs with the aid of a flashlight that could shoot darkness, a car that could do the same, and the occasional right hook.

One of the earliest female superheroes, the Phantom Lady was very much an early distaff expy of Batman. The stories were set in a somewhat realistically depicted Washington, DC as opposed to New York or a fictitious equivalent, which lent the stories the atmosphere of a spy thriller. However, as the artists drawing Phantom Lady were lost to the draft one after the other, the feature was discontinued with Police Comics #23 (October 1943).

In 1947, Fox Features took over publication of the title until 1949. These stories were much more in the traditional comic book style, and introduced a Rogues Gallery including nefarious evil-doers such as Firefiend and Red Horn. More prominently Matthew Baker took over drawing, changing her costume from a fairly modest swimsuit to something considerably more emphasizing.

Fredric Wertham made her one of the most prominent cases in his 1954 Seduction of the Innocent. The cover image shown to the right was used extensively to discuss the sexualization and degradation of women in comics. This was one of rallying cries that lead to the creation of The Comics Code Authority. Her costume was redesigned to be much more modest when a third company, Ajax-Farrel, briefly revived the character in 1954-1955.

Even though DC acquired the rights to Quality's heroes in 1957, the Phantom Lady had to sit out the Silver Age, not coming back until 1973 in DC's Freedom Fighters, where she had joined The Resistance to fight back against the Nazi overlords of the series. She gained the powers of full invisibility and teleportation, but was largely relegated to a support role.

A year earlier, Bill Black had brought back his version of the now-orphaned Fox and Ajax Phantom Lady for Paragon/AC Comics as the Blue Bulletteer, who was later transformed into the sorceress Nightveil to avoid trademark conflicts.

In 1988, the Phantom Lady became a backup character in Action Comics Weekly, now a Legacy Character, with Dee Tyler, the niece of the original, having taken up the mantle. After dying in 2005's Infinite Crisis, the title passed to Stormy Knight in 2006's The Battle for Blüdhaven. Stormy Knight has since flirted with a number of DC superhero teams as a secret agent/quantum physicist/socialite/actress.

In 2012, Phantom Lady gained her own 4-issue miniseries named Phantom Lady and Doll Man. Set on a path of vengeance by the murder of her parents when she was just a child, Jennifer Knight (Phantom Lady) now gets a shot to take down the family responsible. When she goes deep undercover to investigate, what she gets instead is something neither she nor her pint-size pal (Dane Maxwell) could expect.

The Phantom Lady comics have often been accused of being little more than excuses for art of a skimpily-dressed girl in dangerous situations. However, while her image was sexualized, the stories were for the most part not. Her foes did not much care that they were fighting a woman. In an era when most female supers were often treated as inferior to their male peers, the Phantom Lady simply was.

Tropes Associated with the Comic Character: