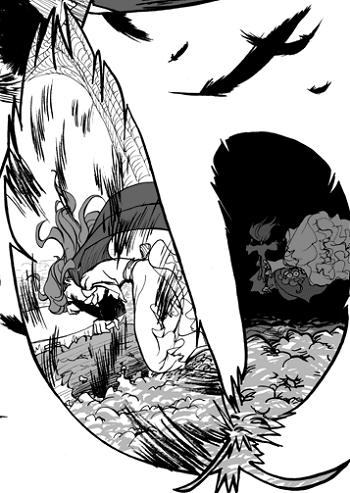 "thog will always treasure thog's adventure with talky-man. it featured non-traditional panel layout."
— Thog, The Order of the Stick #788

A Comic Book/Comic Strip/Manga/Webcomic panel takes on an irregular shape as a form of Painting the Medium. (Many of the same effects can be used on Speech Bubbles, only from a default shape of round.)

The simplest form is to depict something protruding from it in the Frame Break — but anything 2D is possible. There are a thousand ways to do this, and a million reasons.

Depending on how they are juxtaposed, can make following the sequence difficult, since there may not be a left-to-right (or right-to-left in manga), top-to-bottom order. Sometimes panels are even "superimposed" as if they were on top of each other; this is commonest in the Sub-Trope Speechbubbles Interruption, where it is used to show talking over each other.