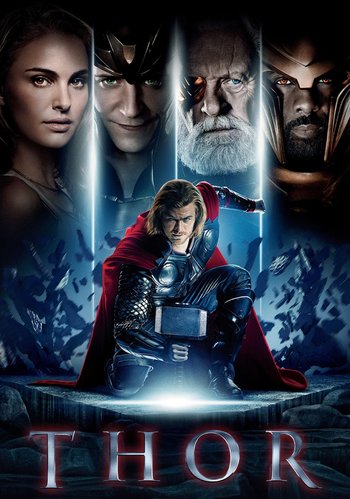 Courage is immortal.note From left to right: Jane Foster, Loki, Odin, and Heimdall. In the center: Thor.
"Whosoever holds this hammer, if he be worthy, shall possess the power of Thor."
— Allfather Odin Borson's enchantment on Mjölnir
Advertisement:

Thor is a Live-Action Adaptation of the Marvel Comics superhero The Mighty Thor, released on May 6, 2011 in the U.S. and on April 22nd in Australia, and one week later elsewhere. It is the fourth film in the Marvel Cinematic Universe and its Phase 1, and was directed by Kenneth Branagh (Henry V, Much Ado About Nothing).

When the headstrong and arrogant actions of Thor Odinson (Chris Hemsworth) nearly causes a war between his home realm of Asgard and the Frost Giants of Jotunheim, his father, Odin (Anthony Hopkins), strips him of his powers and banishes him to Midgard (Earth) as punishment. Taken in by astrophysicist Dr. Jane Foster (Natalie Portman) and her crew, he must learn what it means to be a true hero if he ever wants to prove worthy of wielding his mighty hammer Mjölnir again. Meanwhile, his brother Loki (Tom Hiddleston) discovers his true origins, and sets out on a campaign to claim the throne and steal his brother's place in his parents' eyes.

Thor's story continues in the 2012 Crossover film The Avengers, the 2013 sequel Thor: The Dark World, the Avengers sequel Avengers: Age of Ultron, the 2017 sequel Thor: Ragnarok, the two-part crossover Avengers: Infinity War and Avengers: Endgame, and the 2022 sequel Thor: Love and Thunder. Loki himself eventually got his own story to tell in Loki, a live-action series made for Disney+.

open/close all folders
Tropes A to C
Advertisement:
Tropes D to G
Tropes H to M
Tropes N to S
Tropes T to Z
"Legend tells us one thing, history another. But every now and then, we find something that belongs to both."
Feedback

Thor Taken Out By a Taser

The God of Lightning is taken out by a taser.

Thor Taken Out By a Taser

The God of Lightning is taken out by a taser.