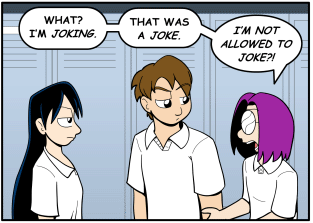 With a side-order of justifications.
"What?
What?
WHAT?
It's a living."
— Mad Dummy (after taking a job as a training dummy), Undertale
Advertisement:

Basically, when someone says or does something outlandish or offensive for whatever reason, only to realize that everyone is staring at him, while he evidently didn't think whatever he said was that odd.

Could be because he just said the dumbest thing anyone has ever heard in their lives, because it was horrifically offensive, or maybe even because he just spouted an unexpectedly inspired bit of brilliance and doesn't realize it yet.

Related to Big "WHAT?!" and Flat "What". Can be used to lampshade an Out-of-Character Moment. Often overlaps with Funny Background Event.