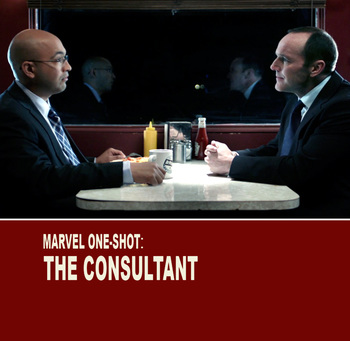 The Consultant is a 2011 short film directed by Leythum and written by Eric Pearson.

Set within the Marvel Cinematic Universe, The Consultant is the first installment of the Marvel One-Shots series, and was included in the home video release of Thor.

After the events of Iron Man 2 and The Incredible Hulk, the World Security Council wants to release Emil Blonsky (Tim Roth) —The Abomination— from prison to recruit him for the Avengers Initiative, against the wishes of S.H.I.E.L.D. Director Nick Fury (Samuel L. Jackson).

Because of this, it's up to Agents Phil Coulson (Clark Gregg) and Jasper Sitwell (Maximiliano Hernández) to brainstorm a way to keep Blonksy's recruitment from happening.

The Consultant is notable for being the first of the Marvel One-Shots, and it further establishes Coulson's character ahead of his death in The Avengers, and eventual resurrection and starring turn in Agents of S.H.I.E.L.D..

The Consultant contains examples of the following tropes: