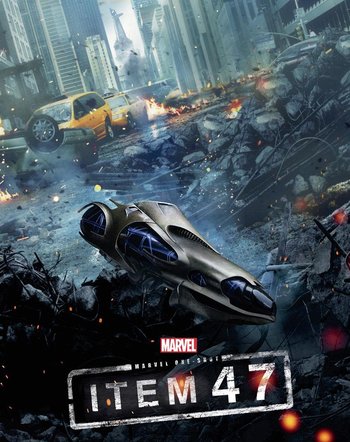 Item 47 is a 2012 short film, directed by Louis D'Esposito and written by Eric Pearson.

Set within the Marvel Cinematic Universe, Item 47 is the third installment of the Marvel One-Shots series, and was included in the home video release of The Avengers.

Taking place shortly after the events of that film, Benny (Jesse Bradford) and Claire (Lizzy Caplan) are a down-on-their-luck couple who recover a gun with alien Chitauri tech, and decide to capitalize on their discovery... by using it to rob banks with.

Naturally, this concerns S.H.I.E.L.D. agents Sitwell (Maximiliano Hernández) and Blake (Titus Welliver), who do not hesitate to get involved and relieve the couple of the weapon.

Item 47 is notable for being longer than any other Marvel One-Shot to date, and it was partly used as a proof-of-concept for a hypothetical Marvel television series that later became Agents of S.H.I.E.L.D. (much like how Agent Carter led to a TV series), where Welliver would later reprise his role of Agent Blake in a guest capacity.