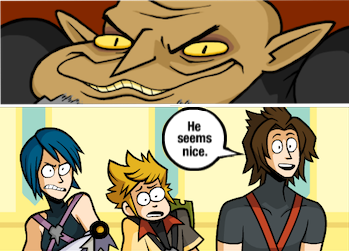 The trio has Brains, Beauty and definitely Brawn.
Jafar: I don't trust him, sire.
Sultan: Nonsense! One thing I pride myself on, Jafar... I'm an excellent judge of character.
Iago: Oh, excellent judge, yeah, sure... not!
— Aladdin
Advertisement:

It usually takes a point blank Evil Monologue from their "friend" over the True Companion's corpse to even faze them into considering the possibility they might not be as hug-tastic a friend as they thought. If it doesn't break them, then they'll just turn right back around and follow their "friend" around, say he forgives them for killing off thousands and betraying him completely, and insist the Power of Trust and Friendship will redeem them. If not, they will experience Post-Support Regret, declaring "This Is Unforgivable!", and denounce them as a friend.

Despite the red flags that Schmitzy and Schmellen give off, Cole and his crew completely trust them to hold the money during a robbery and they double-cross them when the job is done.

Despite the red flags that Schmitzy and Schmellen give off, Cole and his crew completely trust them to hold the money during a robbery and they double-cross them when the job is done.