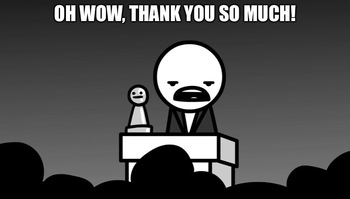 The award for best sarcasm goes to, this guy.

Sarcasm mode is Older Than Radio: the irony mark,

⸮, was proposed in the 19th century. Since then, it has also shown up in comics, both daily strips and comic books, generally in the form of a variant speech bubble outline (jagged, dripping, or icicled) or a different typeface than normally used.

Sarcasm mode shows up in many different forms on the Internet. Here is one way to mark it up:

This is also seen in Faux Computer Code: <sarcasm> </sarcasm> form. Usually with this kind of sarcasm tag, only the closing tag is used. It's not as much fun, and might even be insulting, to announce in advance that you're being sarcastic, and oh, how the world weeps when you're insulted, right? </sarcasm> More recently this is further shortened to just appending /s at the end of the text.

Some people display sarcasm by emphasizing certain words as one would in speech, usually by using italic font. Others however, just use words that are not common in natural speech, such as "Gosh, really?", "My goodness, I never would have guessed that", and "Gee willikers, that's so insightful." Other people have even proposed a sarcastic font.

Scare Quotes or Tradesnark™ may also be regarded as examples of this. Ditto for using capitalization to mock-assert that some type of Serious Business is being discussed.

Roger Ebert has a rather comprehensive essay on this very subject, titled "This is the Dawning of the Age of Credulity,"

written after people completely failed to appreciate the sarcasm behind an 'interview' he gave regarding Creationism. This, however, was due to Poe's Law.

On Wikipedia, people have unsuccessfully tried to outlaw sarcasm, eventually culminating in this essay.

note Ironically, this essay is against sarcasm, and it gets this through by being entirely sarcastic.