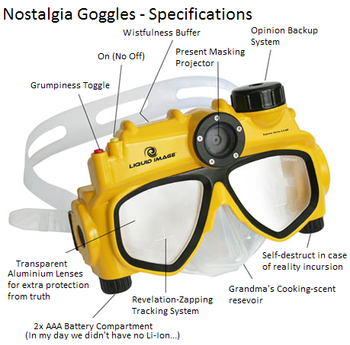 The nostalgia goggles you get today are crap; they were so much better back in my day.
"Even if the good old days never existed, the fact that we can conceive of such a world is, in fact, an affirmation of the human spirit. That the imagination of man is capable of creating the myth of a more open, more generous time is not a sign of our folly."
— Orson Welles ca. 1969
Advertisement:

The most impressionable time is during pre-adolescent, adolescent, and teenage years. These are the years where one is young and undistracted, or less distracted, by the full responsibilities of adulthood and the burdens of getting older. Apart from schoolwork, they simply can afford time to absorb the pop culture or cult genre of the era.

People's tastes are influenced by the media they grew up with. This is most notable when Values Dissonance comes into play: Modern day art may positively depict contemporary societal norms that would have been frowned on years before. Conversely, tastes often change as someone ages: what may have seemed brilliant to a child or teen would seem crude or laughable to most adults, but the memories of how great something from one's youth seemed to linger. And if a person's preference is for something that is out of fashion right now, they may have little choice besides 'hang onto the older version' or 'give up on it completely' if the genre is considered "dead."

It may also be Sturgeon's Law combined with the passage of time: as new media is released, the vast majority will be mediocre or worse, but over time, a powerful selection pressure causes all but the best material (and in some infamous cases, the worst) to be rapidly forgotten, leaving an increasingly inaccurate impression of the overall quality.

Of course, this doesn't imply that newer is automatically better or that the Nostalgia Filter applies to every single case. Sometimes the older work is better, or at least has its own appeal that the present things don't — even beyond "Charm", which is often thrown around to describe stuff mostly to just mean, "It's nostalgic".

You'll notice that this trope sometimes overlaps with the Periphery Hatedom. Almost always, when people complain about how new stuff sucks, they bring up examples of things which were marketed towards the youth of their own generation as examples of "good" or even "classic" works in the genre. Never mind that 20 years ago, when it was being marketed towards them, many adults were saying the exact same thing.

While adults abusing the Nostalgia Filter has become a bit of a cliché (particularly in media aimed at teens and/or preteens), there are many Real Life adults (of various ages) who enjoy both old and new media in equal measures. This is especially true for those who are socially active and hang around a diverse group of people. However, one thing is for certain: Those who abuse it or abuse the concept of it tend to be very vocal about it.

See also Nothing but Hits, They Don't Make Them Like They Used To, Nostalgia Ain't Like It Used to Be, and Appeal to Tradition. Another reason for this trope is that True Art Is Ancient. Contrast Condemned by History and They Changed It, Now It Sucks!. Disco Dan can be what happens when someone puts the Filter on and refuses to take it off to the extent that they act like they're still living in their favourite time period.

In-Universe Examples Only. Pretty much any genre or form is subjected to this in Real Life, so such examples aren't really necessary. Plus, they're very prone to age stereotyping, which we don't want on this page.

This page was so much better back in the day. But today...it just sucks.