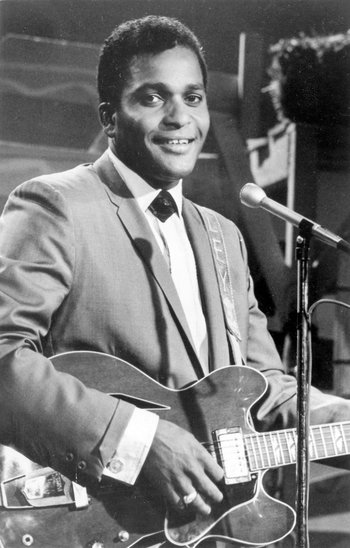 Charley Frank Pride (1934-2020) an American singer, songwriter, and athlete. Pride is most known for being the most prominent black artist in the field of Country Music.

Born the son of a sharecropper in Sledge, Mississippi, Pride taught himself how to play guitar as a teenager. He first cut his teeth as a baseball player for the Negro American League, and then served in the United States Army. However, he had injured his arm in the Army and could not return to baseball, so he shifted his attention back to music.

After moving to Nashville at the encouragement of singer Red Sovine, he met producer Jack Clement, who submitted a demo tape of his to RCA Records' Nashville division. The label issued his debut single "The Snakes Crawl at Night" without a publicity photo, so as not to draw attention to his race. While neither this nor "Before I Met You" charted, he had his breakthrough with the Grammy-nominated "Just Between You and Me" later that same year.

In 1971 he would receive a Grammy Award for Best Country Song for "Kiss an Angel Good Mornin'", his best-known song. At one point he was RCA's second hottest-selling artist, behind only Elvis Presley.

Pride's songs are defined by his smooth baritone voice and lush production, along with constant lyrical themes about nostalgia ("Burgers and Fries"), his home state ("Roll On Mississippi"), and of course, love. He also had success with covers of Hank Williams ("Kaw-Liga", "Honky Tonk Blues", "You Win Again"), George Jones ("Why Baby Why"), and Johnny Rivers ("Mountain of Love").

Following his departure from RCA in 1986, he recorded for the independent 16th Avenue Records, and then various independent labels. Although he did not chart after 1989, he continued to tour throughout the 1990s and into the 21st century. Pride was featured on the Massive Multiplayer Crossover "Forever Country", a 2016 medley which honored the 50th anniversary of the Country Music Association; he would also perform "Kiss an Angel Good Mornin'" with fellow black country singer Jimmie Allen on the same association's ceremony in 2020.