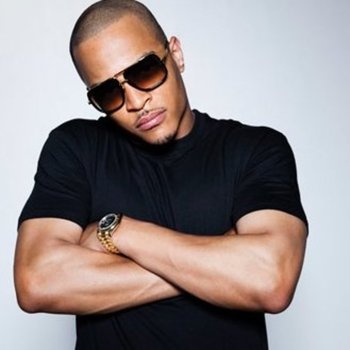 Clifford Joseph Harris, Jr. (born September 25, 1980), better known as T.I (originally, and still known as Tip) is an American rapper, producer, entrepreneur, and actor from Atlanta, Georgia. He's been around since The '90s, but didn't break through until 2003, when he founded his own label Grand Hustle Records. He is notably a Genre Popularizer of southern hip-hop, being that he found great success at a time when most rappers that didn't hail from east or west coasts were considered a novelty (Outkast notwithstanding). His success opened the gates for many later southern rappers to become hugely successful in the mainstream, and has been named "King of the South" for this reason.

He also popularized Trap Music. At a time when it was primarily limited to the dirty south, he helped broaden the appeal of the genre (which would later be fused with EDM in the '10s and become unexpectedly popular). Tip is a member of the Pimp Squad Click (P$C), a southern hip-hop group that's had little success compared to him.

As the founder of Grand Hustle Records, he has discovered and mentored many popular acts in the Southern United States. These include B.o.B, Trae tha Truth, Travis Scott, Young Dro and, most notably, Iggy Azalea. In 2016, he signed with Jay-Z's Roc Nation label.

Outside of that, he's become rather notorious for his numerous arrests by the police and his multiple run-ins with the law; he has been jailed for nearly a year at one point. However, he has since cleaned up his act and has managed to maintain a stable career.

Tip is also known for occasionally acting, the most famous example being his role as Dave in Ant-Man.