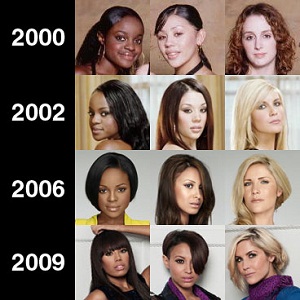 Looking at the pattern, Heidi is due to be replaced by a new white girl
"People are all the same,
And we only get judged by what we do,
Personality reflects name,
And if I'm ugly then so are you,
So are you."
"Ugly"
Advertisement:

Sugababes are a British three-piece Girl Group, based in London. Just as famous for their constant lineup changes (see the main picture) as their music, the group has managed to achieve multi-platinum accreditation for their albums and singles (courtesy of the British Phonographic Industry) despite (or perhaps because of) their ... chequered history.

Originally formed by Ron Tom in 1998 when the original trio of Siobhán Donaghy, Keisha Buchanan and Mutya Buena were just 13-14 years old, they were known as The Sugababies before a name tweak upon signing to London Records. Despite hitting the UK Top 10 with their preternaturally assured debut single "Overload" in late 2000, debut album One Touch did not sell well (although it collected good reviews) and the group were dropped by their label the next year. Around the same time Donaghy, by this point a grizzled, road-weary veteran of 17, quit the group under a cloud of (long unclarified) rumours of bad blood, and unwittingly initiated what would become one of the most infamous Revolving Door Bands in pop.

With former Atomic Kitten member Heidi Range replacing Siobhán, a 2002 reboot saw the group sign to Island Records and return with single "Freak Like Me", sampling Tubeway Army's 1979 electro-pop classic "Are 'Friends' Electric?" to devastating effect. It unexpectedly launched them to Number One, and ushered in a slick, cool sound that produced a string of big hits over the coming years. Together with Girls Aloud, Sugababes held the banner aloft for Girl Group music in Britain in the first decade of the 21st century, pulling off the unusual combination of thoroughly commercial pop and rapturous critical acclaim. They went on to achieve success in the UK and abroad, performing the Theme Song to The Powerpuff Girls Movie and Girls In Love as well as contributing to the soundtracks of The Guru, Love Actually, Wimbledon, Wild Child and St Trinians. They would sell eight million records in the UK alone, with eighteen Top Ten singles including six Number Ones, two Number One albums (with five making the top 10) and their international hit single "Push the Button" featuring on the soundtrack to the 2012 London Olympic Games.

All this though came alongside a continual, slow, but increasingly hilarious morphing of the band's membership. The halcyon run under the 'Mk II' lineup of Mutya, Keisha and Heidi ended when the former contentiously quit in turn at the end of 2005. She duly received a Suspiciously Similar Substitute in Amelle Berrabah, and although with only one-third of the original members remaining something of the shine had come off the group's image, they initially appeared undimmed commercially with a clutch of new hits culminating in their biggest ever seller "About You Now" in late 2007. The 'revolving door' label in public consciousness had become a continuing source of jokes, though, and it was to the surprise of surely very few when sole remaining founder member Keisha inevitably exited in turn in September 2009, amid the usual round of rumours and counter-rumours. Still, somehow, the Sugababes would not die, with yet another like-for-like substitute seeing Jade Ewen parachuted into the ranks just months after representing the UK in the Eurovision Song Contest alongside Sir Andrew Lloyd Webber — and a week after her solo career was meant to kickstart in earnest, killing it off at birth.

Despite the group's apparently cockroach-like resistance to annihilation, this clearout of the last remnant of the original 'Babes finally proved a bridge too far in the public's perception. A couple more hits could not prevent their subsequent seventh album charting lower than any since their debut a decade earlier, and in March 2010 former member Buena applied to the European Trademarks Authority for ownership of the group's name — still amid the controversy of Buchanan's departure, in which Buena insisted that "the Sugababes have ended" without a founding member still in the group. Initially undaunted, the Mk IV lineup reconvened to record an eighth album, but the next handful of years saw few concrete results and the usual fog of conflicting hints, reports but little real news. Eventually, Ewen confirmed that the group had effectively fizzled out in 2011

After years of rumour and hope, it was announced in 2012 that the original lineup — now all equally at a loose end, as it were, and with their differences put behind them — was reforming under the name Mutya Keisha Siobhan, and there was much rejoicing. Naturally, though, things couldn't be that straightforward, and once again little of substance emerged from the new project. In 2018, however, the group at last regained the rights to the Sugababes name and have become a formidable touring act in the 2020s.

This girl group provides examples of: