Talking Down the Suicidal 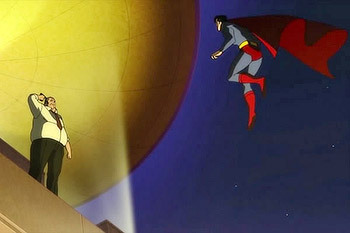 When being super isn't enough to save a life.
"I wish you would step back from that ledge my friend,
You could cut ties with all the lies, that you've been living in,
And if you do not want to see me again, I would understand."
— Third Eye Blind, "Jumper"
Advertisement:

This is when someone is Driven to Suicide and someone else who is aware of their plans decides to actively stop them... by talking them down. Distinct from Interrupted Suicide, but sometimes part of one. If Bob has not gotten the opportunity to interrupt Alice's suicide attempt to request that she not kill herself, maybe she's called him on the phone to say goodbye and he's decided to talk her out of doing the deed rather than go along with her goodbyes. Maybe Bob has told Alice that he plans to kill himself several hours later and Alice, instead of immediately calling 911, is going to take a direct approach towards saving Bob's life. To sum it up, someone has decided, for one or more reasons, that they want to take their own life and someone else has decided to actively confront them and say to them, "Please don't kill yourself."

There are multiple reasons why someone might decide to take this approach instead of immediately calling for emergency help. The most obvious reason for doing this is because of this trope's similar effect to a Care-Bear Stare. Even if your life is saved by your being forcefully stopped from killing yourself when you're suicidal, it's nothing like having someone telling you to not do it because they actually care whether you live or die. Also, having only one person or a small group of people (especially if they are close to the person they are doing this to) talk down one person who is about to kill themselves is better for building up emotional tension and drama than having a large emergency team do this. Maybe the Talker wants to spare the Suicidal the embarrassment of having the police come over to do it, or else wants the Suicidal to get help, but wants to minimize the chances of having them being taken off to a mental hospital (especially if the Talker fears that calling in the authorities might be the last straw that pushes the Suicidal into going through with it).

This is actually one of the best ways to deal with someone known to be suicidal, because the very act of someone they know stopping them might make them reconsider their reasons for wanting to commit suicide in the first place. In such cases, it's likely best to avoid using cliches such as that they "have so much to live for" or they are "selfish or are taking the easy way out." You don't have to go all out and plead with them. Just being there for them to talk to, listening to them, and encouraging them to talk to others can make all the difference.

Alternative Title(s): Please Dont Kill Yourself, Talking Down The Suicide