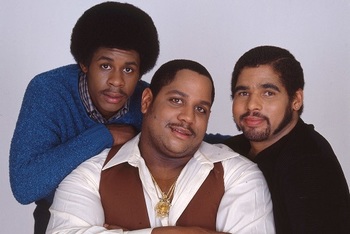 The trio in 1980. From left to right: Master Gee, Big Bank Hank, and Wonder Mike.
"I said a hip hop,
Hippie to the hippie,
The hip, hip a hop, and you don't stop, a rock it,
To the bang bang boogie, say, up jump the boogie,
To the rhythm of the boogie, the beat.
Now, what you hear is not a test - I'm rappin' to the beat,
And me, the groove, and my friends are gonna try to move your feet."
"Rapper's Delight"
Advertisement:

The Sugarhill Gang is an American rap group, considered an important pioneer in the genre. They are best-known for the 1979 single "Rapper's Delight", the first rap number to crack the Billboard Top 40, later becoming an international hit and helping introduce Hip-Hop to a wide audience. note  Although it was actually not the first commercially released hip-hop song, that honor would go to "King Tim III" by the Fatback Band. "8th Wonder" (1980), and "Apache" (1981) are also considered classics. The band hails from Englewood, New Jersey, USA and were named after the Sugar Hill neighborhood in Manhattan. Members are Michael Wright, a.k.a. "Wonder Mike", Henry Jackson "Big Bank Hank" (who passed away on November 11, 2014) and Guy O'Brien, "Master Gee".

Compared to their successors, the Sugarhill Gang have always been family friendly. They refrain from using vulgar language or F-bombs and their songs are plain, innocent fun. It comes to no surprise that they even recorded a music album for children in 1999.

The greatest honor in the band's life was the inclusion of "Rapper's Delight" in the National Recording Registry in 2011 for cultural, historical and aesthetical significance.