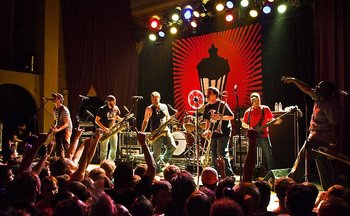 Streetlight Manifesto on tour, 2017. Tomas Kalnoky is on the far left.
Advertisement:

Tomas “Toh Kay” Kalnoky formed his first band, Catch 22, in 1996. After two years, a demo, and their first album, Keasbey Nights, Tomas left the band to finish school. In 2001, he gathered together two people from Catch 22, his brother, his brother’s friends, and several members of various other bands to form Bandits of the Acoustic Revolution. They released one EP, A Call to Arms, in 2001 (they’ve had two full albums in the work since then as well).The same year, Tomas took five members of BOTAR and formed the band this page is about.

If you plan on buying any of their albums, buy it directly from them

: Victory Records aren't the best to work for.

The band and its work provide examples of: