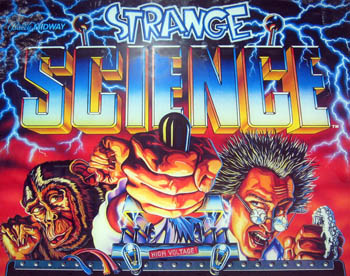 Hey, that's not Lisa...
Dr. Shock: "This is what Strange Science is all about!"
Advertisement:

Strange Science is a Physical Pinball Table designed by Dan Langlois and illustrated by Greg Freres. It was released by Bally/Midway in 1986.

On a dark and stormy night, frisky teens Jodi and Todd venture into an abandoned old house, only to get separated by a Mad Scientist living within. Dr. Shock introduces Jodi to Gertrude the chimpanzee, then announces his wild experiment to swap their bodies. While Todd rushes to save her, the player must use the Particle Accelerator and the Atom Smasher to power up the experiment, and activate the Anti-Gravity machine to move balls up the playfield. Trigger the Power Saver to prevent drains down the outlane, fill up the test tube, then start a five-ball multiball spree and start some Strange Science!

Capitalizing on the "wacky science" comedy movies of The '80s, Strange Science ended up a modest success, selling around 2,300 units. It was marketed with a seven-page black-and-white comic by Brian Colin (the designer of Rampage) documenting the back story. While it's not a particularly deep game, it has a fair number of fans who enjoy its wacky humor and engaging layout.