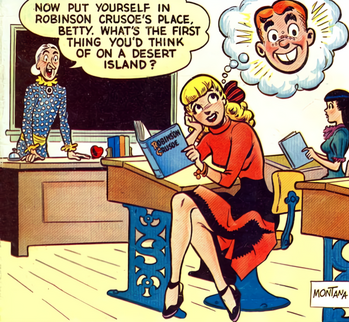 Meanwhile, the boys would get distracted by two coconuts on a palm tree.
"I'm seventeen. Looking at linoleum makes me think about sex."
— Xander, Buffy the Vampire Slayer
Advertisement:

In fiction, teens are ruled by their hormones. Be it boy or girl or something else, they want to attract attention from the opposite sex (and sometimes the same). They will think about this all the time and base their actions around it, with absolutely no moral or religious questioning present.

A teenage girl automatically wants to wear provocative clothes, date sleazy guys, do poorly in school, argue with her mother, and give her father a reason to be an Overprotective Dad. If she doesn't do anything like that, she still secretly wants to. There's likely to be a secondary character who averts this by being a tomboy or otherwise ostensibly uninterested in "girly" things, but even most of them secretly drool over guys, because in writer-land there's no such thing as a girl who isn't obsessed with boys (or occasionally other girls). If she's not interested in fashion at the start, she usually gets a makeover (unnecessary or otherwise) and subsequently winds up dating the male lead.

A girl is seldom allowed to be realistically uncomfortable with her changing body, or want to maybe stay a child a little longer. In Real Life, many young teenage girls have trouble adjusting to their changing bodies and the resultant shift in attention they receive, do not look forward to having a period, and/or are simply disinterested in dating until they reach their later adolescence. In fiction, a late bloomer is almost universally used only if she's going to become interested in boys and clothes, with the implication that there's something wrong with any girl who doesn't, or that a girl is 'incomplete' without a boy.

A boy is seldom allowed to be uninterested in sex. After all, all boys want to become manly men as soon as possible, right? Their other interests, if they have any, are second to girl-chasing because A Man Is Always Eager. This trope comes with the implication that there's something wrong with any boy that is not sexually active or that a boy is 'incomplete' without a girl.

If the writer is male, they may become better-thought-out characters because Most Writers Are Male.

(Younger) Sister Trope of All Women Are Lustful and All Men Are Perverts. For the more prepubescent and precocious version of this trope, see Dirty Kid. As with adult characters, there's no such thing as asexuality, and there are almost always No Bisexuals, especially among teen males. Older female teens will (very rarely) be allowed to be bi, but again that's because Most Writers Are Male. Gay and lesbian teens have been gaining increasing visibility and are often Played for Drama. This trope comes from the same sort of mindset as Everybody Has Lots of Sex since both tropes assume that involvement with the opposite sex is highly important to everyone, but usually not alongside it except in a particularly risqué depiction of the high school setting. Lastly, you can expect none of the moral, religious or familial questioning that most teens go through in real life when confronting the issue of sex, unless the character is supposed to be the school's resident religious fanatic.

Though this is taken to severe extremes in fiction, many adults and even some teenagers (and this varies by community) will agree that this is Truth in Television. Its opposite is No Hugging, No Kissing. See also Bratty Teenage Daughter and Dumbass Teenage Son.