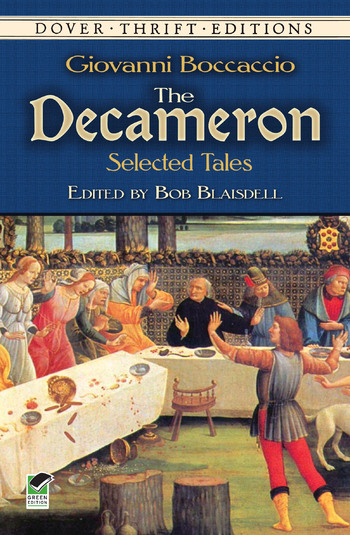 The Decameron is a classic work of Italian literature, written c. 1350-53 by Giovanni Boccaccio.

In the midst of The Black Death, ten wealthy young Florentines—three men and seven women—decamp to a countryside villa with their retinue, and pass their days in storytelling, an attempt to reclaim a world that everywhere is dying. Over the course of ten days they tell a hundred stories between them, full of generous aristocrats, clever tricks, toilet humor, lustful women, wicked churchmen and lots of illicit sex. Boccaccio himself steps out from the shadows twice (once in the introduction to the fourth day, once in the epilogue) to deliver impassioned, hilarious, self-deprecating, and (in the case of the epilogue) incredibly obscene defenses of his work.

Virgin Territory is loosely based on some of its tales, as is The Little Hours.

Tropes in The Decameron include: