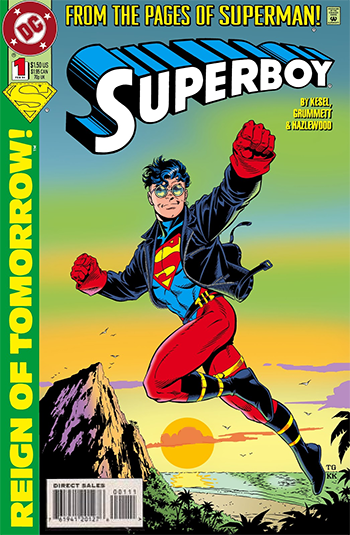 DC Comics ongoing series following the teenage clone Superboy created by Project Cadmus during the The Death of Superman storyline. The series began in 1994 with writing by Karl Kesel and pencils by Tom Grummett, the same creative team that had originated the character in Adventures of Superman.

While travelling on a world tour with his unscrupulous agent Rex Leech, Rex's daughter Roxy, and fellow superpowered Cadmus clone Dubbilex acting as chaperone, Superboy arrives in Honolulu and ends up in a high-profile fight with a super-villain. After chatting with the admiring locals and reconnecting with Tana Moon, his love interest from The Death of Superman who had since moved back to Honolulu as a TV news reporter, Superboy decides to stay in Hawaii as the state's resident superhero.

Kesel and Grummett left the series after issue #30 – afterwards, writing duties were mainly taken up by Ron Marz and by Barbara Kesel, with various artists including Ramon Bernado, Paul Ryan and Georges Jeanty. During this period, Superboy also starred in a second ongoing series Superboy and the Ravers.

With issue #50, Karl Kesel and Tom Grummett returned to the series while taking it in a new direction: Superboy leaves Hawaii to go back to work at Project Cadmus, now reformed and under new management. A whole new supporting cast at Cadmus was introduced, including new love interest Serling Roquette. Superboy was also at long last given a real name, Kon-El. Eventually, Kesel and Grummett departed the series again and a new creative team took over with issue #83, with writing by Joe Kelly & Eddie Berganza and pencils by Pasqual Ferry.

Superboy's association with Cadmus ended in the aftermath of the Our Worlds at War event, and the series was retooled again from issue #94 under the new creative team of writers Jimmy Palmiotti & Dan DiDio and artist John McCrea: Kon took up residence in the Suicide Slum area of Metropolis and mainly focused on tackling street-level crime. This did not last long as the series was cancelled in 2002 with issue #100, the last issue showing Kon going to live with the Kent family in Smallville.

While he continued to appear in team books such as Young Justice, Teen Titans and The Legion, Superboy did not regain his own solo series until more than eight years later, with Superboy (vol. 5). This was cut short by the New 52 reboot, which radically reinvented the character in the new continuity. The original version of Kon reappeared in tie-ins to Convergence and returned to the DCU in Young Justice (2019).