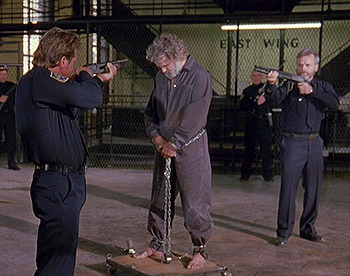 The only way to travel.
Advertisement:

Sure, you can build a fancy Tailor-Made Prison for when your Omnicidal Maniac is hidden away, but what happens when you have to move the little bastard? He can't be thrown in the back seat of a black-and-white with just a uniformed officer for supervision. No, he's got to be shipped in shackles.

This trope is about taking extreme measures to secure a prisoner and/or their intended route during transport. Simple handcuffs and a couple of escorts won't suffice. This is when the guards feel they must chain the prisoner hand and foot, wrap him in a straightjacket, secure him to a hand truck, give him a Hannibal mask, cart him around in an armored vehicle full of strapping young guards toting high-caliber weapons, or all of the above. If he has superpowers, expect the guards' weapons to be loaded with the appropriate Kryptonite Factor, and/or the shackles to be specially made to negate his powers. If he's a Manipulative Bastard notorious for talking his way out of being captured, he may even be gagged.

This may be to prevent the prisoner's allies on the outside from pulling off a daring rescue during transit or to keep him from contacting such allies, but more likely it serves the same purpose as a stationary oubliette: to show the audience that this guy is a One-Man Army so tough that it takes a quarter-ton of purpose-built restraints to hold him, or so dangerous that his captors want to ensure that the odds of him escaping are exactly zero.

Of course, these restraints prove ineffective as often as not, especially since most villains realize that escaping from a few measly chains while under constant armed surveillance is still easier than getting out of their usual prison cell.

Compare Tailor-Made Prison, which refers to custom-made prisons for similarly dangerous prisoners. If the prisoner fights while still restrained, that's With My Hands Tied. Has nothing to do with (relation)shipping.