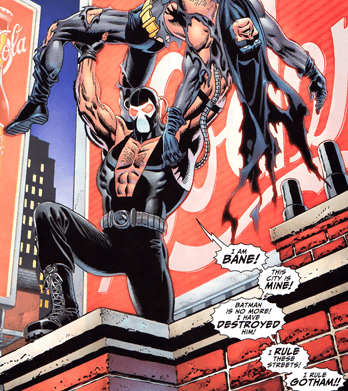 His overhead press max must be amazing.
"[T]he boy from 7. He had fought bravely, wildly. There were hundreds of waterfalls in the arena, it was that year's theme, and Ares caught him at the peak of one. They had fought there as the Pack cheered and whooped, and finally Ares picked him up, held him over his head and threw him over the rushing water with a roar of triumph."
— The Victors Project
Advertisement:

A classic villain pose. To show that he has defeated the hero, the villain lifts him over his head.

As a pose, this has lots of benefits: It's visually compelling, it shows off the villain's strength, and it's a shocking way for the villain to brag about beating the hero, showcasing the hero's vulnerability. Think of it as shadow-Pietà Plagiarism — instead of a loved one gently cradling a fallen hero, an enemy is holding his conquest up for the world to see. The followup action is usually to drop or throw him back to earth, perhaps with some force. Ouch.

This is also the standard position for preparing to toss a guy off something, which is done by both heroes and villains.

The hero (or villain) is usually facing the sky or ceiling while being lifted, though occasionally the defeated opponent is facing the ground.

The hero variants use it as a statement that to get to this person you will have to go through the hero.

A step above the Neck Lift in terms of villainous posturing, and a sister trope to Touch of the Monster (though usually with slightly less innuendo. Usually). Compare Load-Bearing Hero and people lifting other things over their heads as a show of Super Strength. Commonly invokes the Wrestler in All of Us.

Example of:
Do with Him as You Will