Touch of the Monster 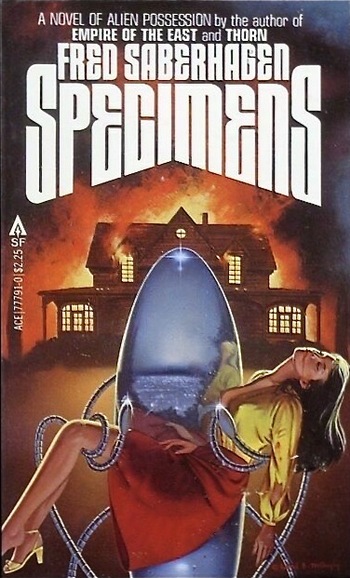 Back before Video Games and all those newfangled, high budget horror films had completely desensitized viewers and ruined it for everybody! ... (cough) ... horror movies would attract audiences by doing the visual equivalent of foreplay in a Film's Poster, in this case presenting one of the following visual variations on an implied rape scene:

Sometimes the menacing party is a man instead of a monster, which is even more disturbing for making the undertones (or overtones, depending on your viewpoint) more obvious.

A four-way chimaera of I Have You Now, My Pretty, Mars Needs Women, Monster Misogyny, and Damsel in Distress, though it may also engender Squick in those who see it. The trope was by no means limited to movie posters; it started with pulp magazine covers and extended to comic books and video boxes, where it was a leading offense to Media Watchdogs and Moral Guardians. Of course, not all of the criticism was well-founded, since this trope was used even when monster-on-human action was not a plot point.

This has become a Discredited Trope in recent years.

Rape of the Sabine Women

Playing with Its Food

From the Pages of Bettie