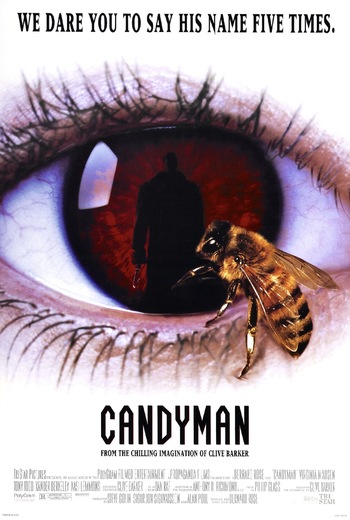 Candyman is a 1992 supernatural horror film directed by Bernard Rose, starring Virginia Madsen, Xander Berkeley, Kasi Lemmons, Vanessa Williams, DeJuan Guy, and last but certainly not least, Tony Todd as the titular character.note The film considered by many to be his most famous role (aside from William Bludworth in Final Destination).

Helen Lyle (Madsen), a Chicago graduate student, is conducting research for her thesis on urban legends. While interviewing freshmen about their superstitions, she hears about a local legend known as Candyman, the son of a slave who was brutally tortured and murdered because of a love affair he had with the daughter of a local (white) plantation owner.

According to the legend, anyone who looks into a mirror and chants his name five times will summon him, but at the cost of his or her own life, similar to the Bloody Mary urban legend. Helen believes that Candyman cannot exist and jokingly calls his name in the mirror in her house. Little does she know her innocent joke will set in motion a terrifying series of events that will cause her to question what is real and what is legend...

Candyman is based on the short story "The Forbidden" by Clive Barker, and was followed by two sequels, Candyman: Farewell to the Flesh (1995) and Candyman: Day of the Dead (1999). A fourth installment, Candyman (2021), is a direct sequel to this film.

No relation to the song "The Candy Man" (or the character it describes), though the Sammy Davis Jr. cover of said song would appear during the opening Logo Joke of the 2021 sequel.