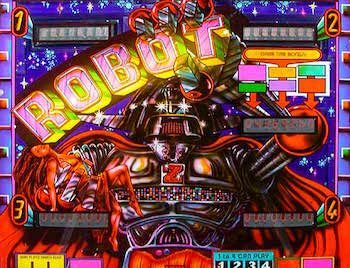 Rajnikanth without the special effects.
Robot: "CHALLENGE THE ROBOTS OF ZACCARIA."
Advertisement:

The game depicts a Robot War in an unspecified future, with the player as part of a human resistance fighting against the mechanical menace. Hit the five dropdown targets to enable the Orange Special, then knock down the three Z-Targets and enter the Tunnel to raise the bonus multiplier. Run across the Robot Bridge and five robots will rise from the playfield; knock them all down to advance the Red Special and collect the jackpot.

In spite of its cliche-riddled threadbare Excuse Plot, Robot is well-regarded for its shot variety and lively playfield design. Rolling down the Robot Bridge to raise the robot targets is viscerally satisfying, and the vibrant artwork has a distinctively European charm. The scoring can be a bit uneven, but this remains a fun and original game for players of all types.

A digital version is available for Zaccaria Pinball.

Robot: "MISSION COMPLETE. RETURN TO BASE."