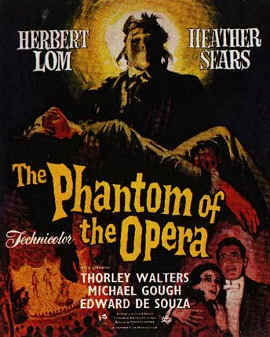 "I think there is something... evil... in this theater, Christine. Something or someone trying to stop the opera from ever being performed."
— Harry Hunter
Advertisement:

The Phantom of the Opera with Hammer Horror approach, released in 1962. Like many other Hammer productions, it was directed by Terence Fisher.

Mysterious events of sabotage at an opera house in Victorian London plague their premiere of a new opera about the life of Joan of Arc composed by Lord Ambrose d'Arcy (Michael Gough), an arrogant aristocrat. The producer of the opera, Harry Hunter (Edward de Souza), is determined to discover who is behind the events while also looking for a replacement for the lead soprano, who was frightened into leaving the production. A promising young singer named Christine Charles (Heather Sears) auditions for the role. Harry believes her to be perfect for the part, and the two end up falling in love.

When Christine is kidnapped, Harry discovers that she has been taken to the sewers beneath the opera house, where a masked man known as the Phantom (Herbert Lom) is giving her vocal lessons. He reveals to the two that he is in fact a former music professor named Petrie, whose compositions—including the opera—were plagiarised by Lord d'Arcy, to whom he had gone for help with getting them published. After breaking into the printer's to destroy the falsely-attributed music in a fit of rage, Petrie's face was disfigured by etching acid, and in the years since he has lived as an outcast below the theatre. Now he only wishes to hear his work performed and believes Christine can do justice to the leading role of Joan with his help.