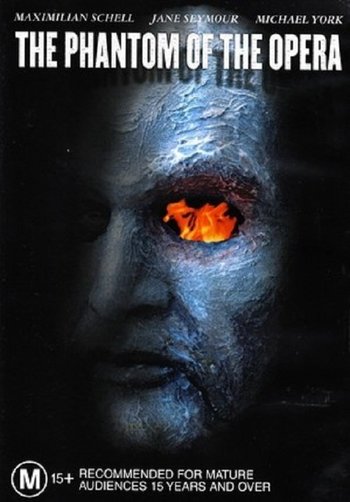 Sándor Korvin (Maximilian Schell), the conductor at the Budapest Opera House, is training his wife Elena (Jane Seymour) for the role of Marguerite in Faust. Her debut is met with mockery and a scathing review orchestrated by the vindictive Baron Hunyadi (Jeremy Kemp), whose advances she spurned. Elena is Driven to Suicide, and the grieving Sándor confronts the critic who wrote the review. He kills the man, but a fire is started in which Sándor's face is horribly disfigured. He retreats to the sewers beneath the opera house, where he becomes the masked Phantom of the Opera. Years later, a new production of Faust is being put on at the opera house. A young chorus girl named Maria Gianelli (also played by Seymour) catches the eye of Sándor, for she is the spitting image of his dead wife. He begins to tutor her, but is infuriated to learn that she is falling in love with the director of the opera, a man named Michael Hartnell (Michael York)