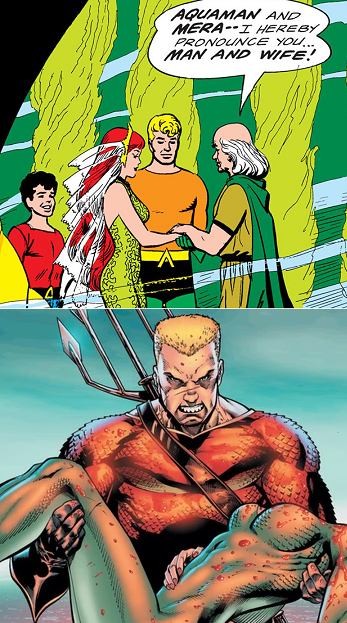 Western popular culture has long told stories of black widows — women who kill their husbands for money. This trope is something different — a person is driven to kill by the loss of their spouse (or significant other or loved one).

For obvious reasons, this character is usually on the low end of the Idealism/Cynicism scale, tending towards Anti-Hero, Anti-Villain, or villain. Very, very rarely will the Crusading Widower be The Hero.

Sometimes the kids actually survive, and need to be protected. That doesn't necessarily mean that they will in any way stop their parent from making messes of a whole mess of people. There's also the possibility that the child is someone the parent will try to mold into a weapon of vengeance, either by working with them or by having the child carry on in their stead. Of course, he might abandon the child to be raised by someone else entirely, or do the revenging in secret. He may also try to drown his sorrows at first, only to be "rescued" by a friend who will motivate him with an offer to somehow atone for his mistake, or catch the culprits. If it's a fantasy or sci-fi setting, a third goal may present itself: bringing them back to life. This is rarely a good thing: his loved ones will probably beg him not to, or he will choose not to resurrect them as part of a Friend-or-Idol Decision.

This trope is a subtrope of You Killed My Father. They Were Holding You Back and Disposable Woman are related tropes.