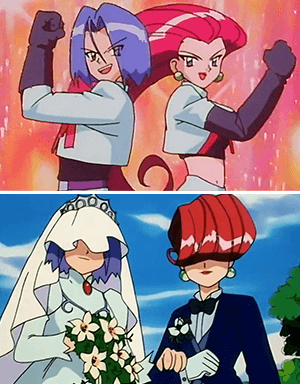 "Prepare for trouble, and make it a nuptial!"
Mal: Whatever happens, remember that I love you.
Zoe: Sir?
Mal: Because you're my wife.
Zoe: Right, sir. Honey.
— Firefly, "The Train Job"
Advertisement:

Alice and Bob need a disguise. Maybe they're detectives, maybe they're spies, or maybe they're just on the run from the law. For whatever reason, the disguise they decide to adopt requires that they pretend to be a couple. Hilarity Ensues!

This may be a sign of Unresolved Sexual Tension between them; alternately, it can be used to highlight the lack of tension, by showing just how unnatural it feels to have them play the role. Either way, expect a huge amount of bickering and an agreement not to use tongues. Can also end up becoming a Romantic Fake–Real Turn.

Compare the rather briefer Fake-Out Make-Out, which may become necessary at some points.

Agents 86 and 99 choose a very appropriate/prophetic disguise for spying on a suspect.

Agents 86 and 99 choose a very appropriate/prophetic disguise for spying on a suspect.