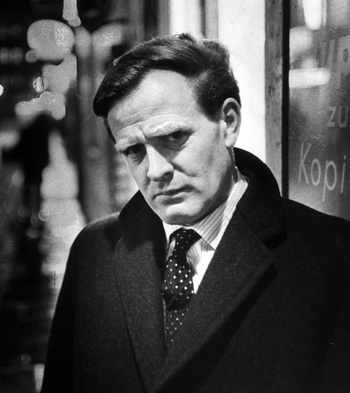 "John le Carré's new espionage novel where... be honest, we had you at le Carré didn't we?"
— Advert for Our Kind of Traitor (2010)
Advertisement:

He was a real-life member of MI-5 and the Secret Intelligence Service until he was blown by Kim Philby to the KGB. While he was in the service, he started writing novels and carried on once he'd left.

His novels are definitely of the Stale Beer flavour of Spy Fiction, being very dark in places. Eight feature his most famous creation, George Smiley. Although most of his works - and all of his best-regarded ones - are definitely Spy Fiction, he is one of the rare "genre" authors to have seriously blurred the line between genre and Literary Fiction.

Has added several espionage Stock Phrases (and popularised existing ones), both among the public and, apparently, real spies.

His novels in general contain examples of:

Alternative Title(s): Call For The Dead, A Murder Of Quality, The Looking Glass War, The Little Drummer Girl, The Secret Pilgrim, A Small Town In Germany, The Night Manager, Our Game, The Tailor Of Panama, Single And Single, Agent Running In The Field, Silverview, A Delicate Truth, The Constant Gardener, Absolute Friends, The Mission Song, The Smiley Series