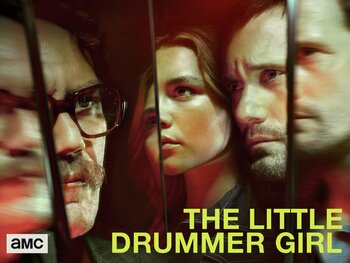 "If I'm going to do this, I have to know what it is I am going to do."
— Charlie
Advertisement:

Based on John le Carré's 1983 novel of the same name, The Little Drummer Girl is a 2018 six-part crime drama BBC mini-series directed by Park Chan-wook, which stars Alexander Skarsgård, Michael Shannon and Florence Pugh. Set in 1979, it follows Charmian "Charlie" Ross (Pugh), an English actress on the political left, who is tapped by Mossad agent Martin Kurtz and his fellow Badass Israeli agents as a potential Double Agent in a Palestinian terrorist cell which targets Israelis in Europe. Under the tutelage of Sexy Mentor Gadi (Skarsgard), Charlie slowly loses touch with what is true and what is fiction.

This is the second media adaptation of le Carré's novel, which was previously filmed by George Roy Hill in 1984 in a same-titled adaptation with Diane Keaton and Klaus Kinski.