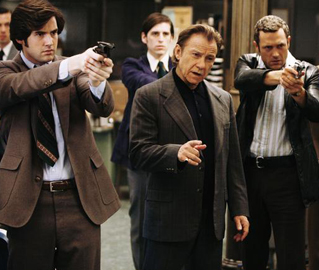 Look at those cavemen go.
Advertisement:

The American version of Life on Mars, set in New York City. The plots in the early series were close remakes of the BBC original, only localized in: Sam Tyler of the NYPD is hunting a serial killer, listens to David Bowie, gets hit by a car, wakes up in 1973, becomes a Fish out of Temporal Water who is dealing with the different standards of the time and hears voices in his head and on TV that suggest he may just be in a coma. As the show progressed, it introduced the reoccurring motifs of tiny robots (which may or may not be released into people to prove the existence of a human soul), toy rocket ships, and a mysterious group called the Aries Toy Company (more sinister than it sounds). Even the mentions of Luke Skywalker count. There were also hints of a government conspiracy and even the introduction of another character who said he had been abducted from the future as well. The whole thing was a head scratcher for sure.

Tropes carried over from the British version-