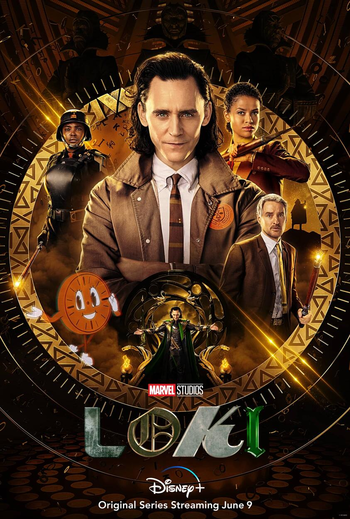 Loki is a superhero Science Fantasy thriller / Fantastic Noir series spinoff of the Thor film franchise, based on the Marvel Comics character of the same name. The series is the 26th overall entry of the Marvel Cinematic Universe, the 3rd installment of the MCU's Phase 4, and the 3rd live-action series to be developed by Marvel Studios for Disney+. Michael Waldron serves as showrunner, while Kate Herron (Sex Education) directed the entire first season with Tom Hiddleston himself serving as an executive producer.

Set after the events of Avengers: Endgame, the series follows the Alternate Universe Loki (Tom Hiddleston) note the main timeline Loki was killed by Thanos in Avengers: Infinity War, who escaped with the Tesseract/Space Stone after the Battle of New York. He gets arrested, then forcibly recruited, by the Time Variance Authority, an organization that exists outside of the flow of time and is dedicated to preserving the Sacred Timeline, to help them stop another version of himself that's been antagonizing and massacring their agents, who could potentially threaten reality itself if left unchecked. If that sounds a little confusing, don't worry: Loki's just as confused. But he's determined to turn this to his advantage.

At least until he manages to track down his evil variant. Then things get even more complicated.

The first season made its debut on Disney+ on June 9, 2021, airing for six episodes through July 14. Additionally, the first season is being treated as the second part of a spiritual tetralogy with WandaVision, Spider-Man: No Way Home, and Doctor Strange in the Multiverse of Madness, with the events of the season finale helping to set up the events of the latter two. It also links directly to What If…? and sets up plotlines expected to get paid off in Ant-Man and the Wasp: Quantumania.

A second season has been confirmed to be in development, making it the first live-action Marvel Studios series for Disney+ to have a multi-season run.note WandaVision and The Falcon and the Winter Soldier were intended as limited series, while What If...? (2021) is an animated anthology series. Kate Herron will not return as director for the second season, having only been committed to the first season, and Justin Benson and Aaron Moorhead will take her place for the majority of the episodes.

Miss Minutes Explains the Time Variance Authority and their duty to protect the sacred timeline.

Miss Minutes Explains the Time Variance Authority and their duty to protect the sacred timeline.