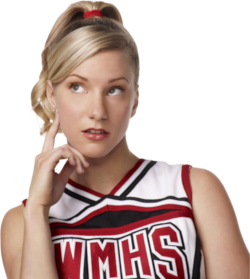 "I'm pretty sure my cat's been reading my diary."
Blackadder: Oh yes, Percy, and the new ruff?
Lord Percy: (confident) Better?
Blackadder: Worse.
Lord Percy: Uh, the fashion today is towards the tiny.
Blackadder: Well, in that case Percy, you have the most fashionable brain in London.
— Blackadder II
Advertisement:

The Ditz is a character whose defining characteristic is profound stupidity or quirkiness. In fiction, female ditzes tend to be sweet and naive, while male ditzes tend to be oafish but lovable (whether if they were inverted or not gender-wise). Either way, they're almost always friendly and sociable (or very kindhearted, honest, & humble in some instances), something that can't be said for the polar opposite side of this trope. The Ditz is written to appear unintentionally funny or humorous. In a drama series, they provide comic relief.

Unlike The Fool, The Ditz is seldom in any real danger and, even if they were, luck can often be counted on to save them. Though darker, or more cynical stories, tend not to favor them, their stupidity usually getting them killed in some awful fashion.

A good looking Ditz (of either sex) might be a Brainless Beauty. An independently wealthy Ditz is an Upper-Class Twit. A Ditz that's a Mighty Glacier (Most commonly as The Big Guy or The Brute) is a Dumb Muscle. A Sexy Secretary of this class would be a Ditzy Secretary.

A more competent if lucky Ditz will often become The Fool. Taken to its weirder extreme, the Ditz can evolve into a Cloudcuckoolander.

One reason you can find The Ditz on so many TV shows is that it gives the audience someone to feel superior to. No matter how stupid one might be, you are still smarter than The Ditz. In certain settings, this trait may also leave them suspect to be accused of having an Ambiguous Disorder to justify their general behavior. In series with a Gadgeteer Genius, count on this character to be the dreaded Spanner in the Works, often ruining the Genius's latest project by touching things that shouldn't be touched.

See also: Asian Airhead, Genius Ditz, Obfuscating Stupidity, Dumb Blonde, and The Klutz (who can relate with having a foolish persona). Can overlap with This Loser Is You, but isn't the same thing.

These guys are so dumb, they don't even know how voodoo dolls work!

These guys are so dumb, they don't even know how voodoo dolls work!