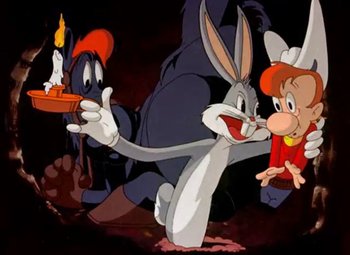 Buckaroo Bugs is a 1944 Looney Tunes cartoon, directed by Bob Clampett and starring Bugs Bunny. It is notably the first Looney Tunes short to star Bugs (all of his previous appearances were in the Merrie Melodies series) and the last Warner Bros. cartoon produced by Leon Schlesinger.

In the small town of "San Fernando Alley", an unseen thief named the Masked Marauder attacks and steals many of the townsfolks goods, especially their carrots. They call upon the help of a hero named Red Hot Ryder, who turns out to be a pint-sized dimwit.

As one can guess, the Marauder is none other than Bugs Bunny, who is so amused with his newfound foe that he decides to screw around with him for the heck of it.