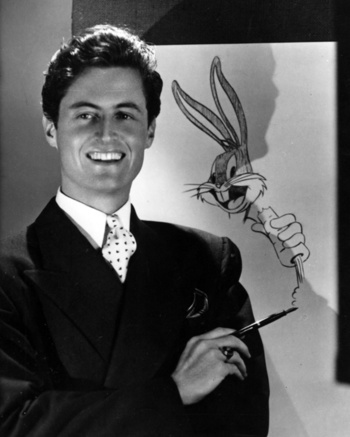 The Man from Wackyland.
Advertisement:

If it was Tex Avery who realized that animation can do anything and Chuck Jones who took subtle humor and stylization to new heights in animation, then it was Robert Emerson "Bob" Clampett (May 8, 1913 – May 2, 1984) who took the good, old-fashioned "rubber hose" style that animation had in the 1930s and gave it a wackier makeover. One of the most popular directors of the Looney Tunes and Merrie Melodies series of cartoon shorts made by Warner Bros. during The Golden Age of Animation (second only to Chuck Jones in popularity), Bob Clampett was nothing short of a mischief maker, being both a real life version of Bugs Bunny, in addition to being a real life Daffy Duck (of the early, screwy variety).

Being inspired by the strange works of artist Salvador Dalí, as well as the other animation studios like Disney and Fleischer and even newspaper comic artists like Milt Gross, Clampett eventually began working at the Warner Bros. distributed animation unit of Leon Schlesinger, after failing to get a job at the Disney studios. (Disney had wanted to hire him, due to Clampett's excellent drawing skills, but they had all the animators they needed.) There, Clampett and his soon to be mentor, Fred "Tex" Avery, went to work in a crumbling wooden shack assigned to them, not far from the main Schlesinger lot. There, they discovered they were not alone — specifically, said shack appeared to be infested with termites. Still, being comfy there, the duo blessed upon the place the affectionate nickname Termite Terrace, which would soon become the unofficial name for the entire Looney Tunes animation studio as a whole.

Avery left the studio in 1941, but Clampett, having learned quite a thing or two from him, began experimenting with his own style of animation — a very wacky, surreal one which combined the early principles of rubber hose animation from The Silent Age of Animation, with the more modern, higher quality principles and art productions of a Disney short. The results were some of the finest cartoons ever made in general, let alone by the Warner Bros. animation unit.

After leaving Warner Bros. in 1945, Clampett started his own animation studio and created Beany and Cecil.

While for many years he was an esoteric director (his influenced downplayed in favor of the other directors, and his smaller output compared to them) but his cartoons have gained a surprisingly large fanbase in recent years, receiving praise and admiration from professionals like Milt Gray, Eric Goldberg and John Kricfalusi (the latter being his protege and biggest fan, is heavily influenced by him, and is also partly responsible for getting Bob's shorts back into the limelight).

Lost Works
This section refers to a variety of projects Bob worked on outside of his mainstream cartoons.

Tropes in the work of Bob Clampett: