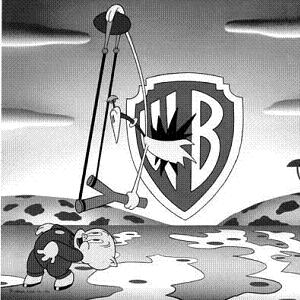 They call it "Looney Tunes" for a reason, y'know.
"It CAN happen... here. Population, 100 nuts and a squirrel."
— Signpost on the border of Wackyland.
Advertisement:

"Porky in Wackyland" is a 1938 Looney Tunes short, directed by Bob Clampett and written by an uncredited Warren Foster. The short has Porky Pig going off on a quest to Darkest Africa to find the legendary Do-Do bird, for a cash reward of $4,000,000,000,000note P.S.: 000,000,000. Upon arriving, he discovers the Do-Do's homeland: Wackyland, an unbelievably insane place where nothing makes sense and anything can happen. All in all, the short winds up being one really, really strange ride.

The color remake, "Dough for the Do-Do", which was directed by Friz Freleng and released in 1949, is the version most viewers are familiar with simply because it was a more attractive version to air on color television during the 1960s, '70s, and '80s. However, there's also a computer colorized version of "Porky in Wackyland" that aired on Nickelodeon and later Cartoon Network in the 1990s and the early 2000s.

The film has been inducted into the National Film Registry.

"Porky in Wackyland" provides examples of: