Western Animation / The Twisted Tales of Felix the Cat 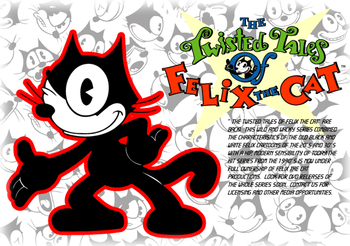 The Cat Returned.
Fly: Whats going on down there?
Spider: It's that Felix the Cat show, you know it's like a wacky goof parade.
Fly: Oh.
Spider: I'm gonna eat you now.
Fly: Really? I'm shocked.
—The entire series summed up in a nutshell, from "Surreal Estate"
Advertisement:

The Twisted Tales of Felix the Cat is an 1990's take on the classic Felix the Cat series, being an attempt to return the series back to its roots after decades of using the 1950s Joe Oriolo portrayal of Felix.

The series is very kooky, surreal and fast paced-as a whole, owing a lot to cartoons from The Silent Age of Animation and The Golden Age of Animation, especially the surreal works of Max and Dave Fleischer.

Unfortunately, the series lasted only 21 episodes.note Technically there were 55, as each show was usually split into three shorts, with a couple two parter episodes. Originally aired from 1995-1997 on CBS' Saturday morning block in America. Other countries have aired this show on overseas cable channels (mostly any Nickelodeon or Viacom-based kids' network). Later Felix productions (namely the Spinoff Babies series Baby Felix & Friends and the 2004 film Felix the Cat Saves Christmas) largely ignored the Twisted Tales continuity & art style.

As of July 2020, both seasons are streaming on Peacock.

Tropes This Series Provides Examples Of:

Felix: Poindexter, this is horrible! We're prisoners in a cartoon with a moral to it!