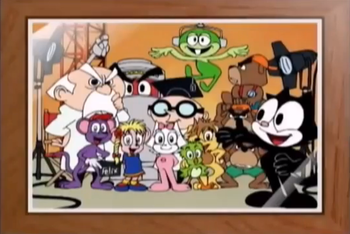 Baby Felix and Friends is an Anime spinoff of the Felix the Cat (Joe Oriolo) cartoons and a Spinoff Babies take on the classic Felix the Cat character. It was produced by the now defunct Radix animation studio and ran for 26 half hour episodes (consisting of 65 five minute episodes total) on the NHK network from 2000 to 2001. An English dub of the series was released on DVD in the US.

Two tie-in video games were released for the series; Baby Felix Halloween for the Game Boy Color, and Baby Felix Tennis for the PlayStation.