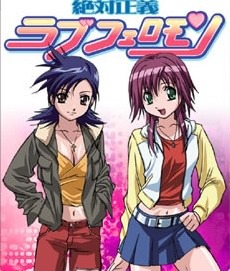 Zettai Seigi Love Pheromone stars Aimi and Kaoruko, wannabe comedians and heroes of justice. As their manager, Tomokazu Seki (played by himself), attempts to find them a job so they can rise to superstardom, their hair trigger natures and motto of "Anything can be done in the name of justice!" frequently end in their would-be places of employment crashing to the ground.

The other half of the show, Soreyuke! Gedou Otome Tai tells the story of the five Hokke sisters, who are currently suffering from the double whammy of Parental Abandonment and Perpetual Poverty. The family consists of, from oldest to youngest, Otone, Maika, Yoku, Kanashi, and Utano. They happen to be the daughters of mooks from an evil organization. One day, they release the Sealed Evil in a Can Akumako, an imp who rested in a vase dad left behind. Akumako tells them that to carry on their parents' wishes, they must become "evil". To attempt this, they become the Gedou Otome Tai, a team of Magical Girls bent on carrying out evil. But they're just so darn nice...