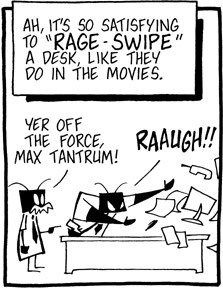 Maybe the Cowboy Cop has been forced to turn in his badge, or the Big Bad's plans have just been thwarted, or the hero's Berserk Button just got pressed. How better to show rage or impatience than to take one arm and swipe everything off the desk (sometimes accompanied by an inarticulate scream)?! Used as shorthand to show that the character is out of control and they need something to take their frustrations out on.

Often a part of an Anger Montage, Rage Quit or Villainous Breakdown. Sister trope of Flipping the Table and Tantrum Throwing. Compare/contrast Desk Sweep of Passion and Sweeping the Table.