Minion with an F in Evil 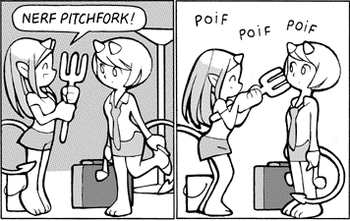 "You're quasi-evil. You're semi-evil. You're the margarine of evil. You are the Diet Coke of evil. Just one calorie, not evil enough."
— Dr. Evil (to his son Scott), Austin Powers The Spy Who Shagged Me
Advertisement:

No, he doesn't kick himself by accident when trying to Kick the Dog. He's a henchman to a Card-Carrying Villain who can't quite wrap his mind around card-carrying villainy. As such, they often get confused and do "good" things like saying please or thank you or being kind to the heroes in some way by mistake — and get yelled at for it by their superior if caught. In short, the Minion with an F in Evil is somebody who works as a Mook or other villainous subordinate, but is far too sweet, polite, or empathetic to really hack it as a bad guy. They try, but they never really manage to come off as genuinely evil, leading the audience to sympathize with them. Their motivation for being evil is usually presented more sympathetically, too; they may have been Forced into Evil, or misled into it by a more-capable authority figure who they trusted. Well-done examples will have a valid excuse as to why an otherwise sweet-natured character is furthering Lord Von Bloodstone's plans for conquering the planet. A certain degree of naivety and/or innocence is generally presumed in these cases for a naive character or a Kindhearted Simpleton, and sometimes demonstrated for the audience's benefit.

This character type tends to be predicated on the assumption that Rousseau Was Right; theoretically, this so-called "villain" either hasn't properly learned how to be bad, or simply doesn't have it in them to be bad. These minions usually stumbled into their current position by mistake, or the machinations of another character. It is not just a matter of intelligence; the minion is not goonish, but actually very sweet and gentle. This trope is usually Played for Laughs, and most commonly seen in children's shows. Written right, they can be just as funny - or even more funny - in adult-aimed media. They often get a Mook–Face Turn at the end of the series, or earlier if their boss is particularly mean with a Mistreatment-Induced Betrayal. They may also get a The Dog Bites Back moment to go along with it. Even in more mature works, the Minion with an F in Evil will usually get a much softer ending compared to their one-time teammates. In really mature or gritty works, the writer may choose to Make an Example of Them, showing what true innocence will get you in this setting.

Not to be confused with Affably Evil characters, who are evil but polite about it. Certain versions are relatives who the villain is obliged to keep around despite their incompetence, or horrific monsters that turn out to actually be Gentle Giants. They are often minions in a broad sense who do household jobs and do not even contribute anything to his actual crimes. If this trope is played seriously it will lead to a character who is smart enough to realize that he is most likely Forced into Evil and will try to escape at first chance.

Contrast Harmless Villain, Worthy Opponent, Punch-Clock Villain, Reluctant Monster, and Obliviously Evil. See also Bumbling Henchmen Duo, Surrounded by Idiots, Token Good Teammate, Poke the Poodle, White Sheep, Merciful Minion, Good All Along, Peer-Pressured Bully, and Vile Villain, Laughable Lackey. Compare and contrast with Hero with an F in Good and Underling with an F in PR. Frequently hold back a truly terrifying boss due to Conservation of Competence. Often makes up a Smart Jerk and Nice Moron pair with his boss, who heaps abuse on him for his good tendencies.

Poor Siegfried really drew the short straw at KAOS in the sidekick department.

Poor Siegfried really drew the short straw at KAOS in the sidekick department.