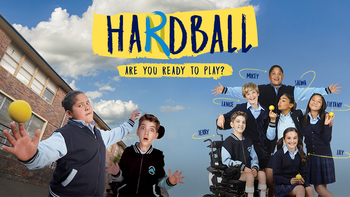 Hardball is a 2019 Australian children's television series that screened on ABC Me. The series is produced by Northern Pictures with Screen Australia in association with Create NSW and the Australian Children's Television Foundation (ACTF).

When Mikey moves to Western Sydney, he finds himself in the thick of the ultra-competitive, schoolyard game of handball. He is befriended by misfits Jerry and Salwa, who join forces to train him to become the "sweetest-bestest-acest" handball champ that Western Sydney has ever seen. They aim to topple current king of the court, Tiffany and her minions, Lily and Lance.