Series / Gamer's Guide to Pretty Much Everything 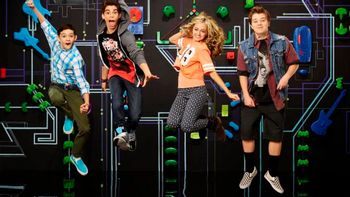 Gamer's Guide to Pretty Much Everything is a Kid Com on Disney XD starring Cameron Boyce of Jessie fame that premiered on July 22, 2015 and concluded on January 2, 2017 after two seasons. Its premiere occurred alongside a Lab Rats/Mighty Med Crossover.
Advertisement:

In this series, Cameron plays Conor, a teenage professional gamer who is forced into retirement due to a thumb injury and must now navigate life as a regular student. Along the way, he runs into three fellow gamers — Wendell, Franklin and Ashley — who he convinces to help him try to rejoin the professional gaming circuit and they soon form their own professional gaming clan. The show is presented through a framing device within the context of Conor's viewpoint, which usually takes the form of a video game interface.

On January 10, 2017, it was annouced that the show was cancelled

This marks Boyce's last TV series as a main cast member before his unexpected passing in July 2019.

Tropes in Gamer's Guide To Pretty Much Everything: