Pronouncing My Name for You 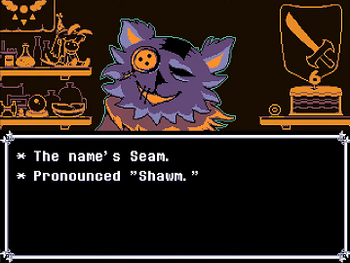 A character walks another through the correct way to say their name.

Names that get this treatment include a common name with a less common pronunciation or multiple ways to correctly say it, such as Tara or Andrea; a name derived from another language than the one used in the work (like a Czech name in a work that's in English) that would trip up a layperson; and a name from a conlang or one that's otherwise totally made up.

Other characters might react to the explanation with accusations of poshness ("You're saying your own name this way just to sound fancy") or with Who Names Their Kid "Dude"?. Someone who still gets it wrong might just be forgetful or ditzy. However, the term might be genuinely difficult for them to say, if it uses phonemes that are rare or nonexistent in their native language. A malicious character will pronounce the name incorrectly despite the explanation. In comedic works, a character having to repeatedly correct others can become a Running Gag.

This trope is useful out-of-universe because now the audience also knows the correct pronunciation without having to guess or seek supplementary material.

Compare Spell My Name with an S (if a name with a less common spelling is spelled out for someone). Contrast No Pronunciation Guide. May overlap with Accidental Misnaming and Accent Upon The Wrong Syllable. This may or may not prevent Viewer Pronunciation Confusion.

Examples are limited to personal names, clarified by the name's owner or someone close. Other proper nouns such as locations often have You Say Tomato in play, while someone should reasonably know their own name better than anyone else. This is not just about people's names being mispronounced — the correct pronunciation has to be clarified on-screen. The audience's opinion of what is correct is irrelevant.

Molly ends up making an enemy in a snarky social media influencer.

Molly ends up making an enemy in a snarky social media influencer.