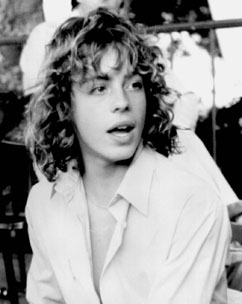 Garrett in 1979.
Leif Per Nervik, known professionally as Leif Garrett (born November 8, 1961 in Hollywood, California) is an American singer, actor and former Teen Idol. Since the age of five, he has appeared in numerous productions in many mediums, including television (with his Star-Making Role as Endy Karras on Three For The Road being a prime example), film, stage and records.
Advertisement:

Garrett has had many run-ins with the law, particularly regarding his long-running drug habit. An episode of Behind The Music in 1999 reconciled him with his former friend who he unintentionally paralyzed in a substance-fueled car accident.

From 2008 until 2013, Garrett was a commentator on World's Dumbest..., where he often showcased his self-deprecating humour in regards to his life, career and legal troubles. He's also appeared on other reality programs such as Fear Factor and Celebrity Rehab. He continues to perform the occasional gig for charity and released a memoir, Idol Truth, in 2019.

This actor/musician shows examples of: